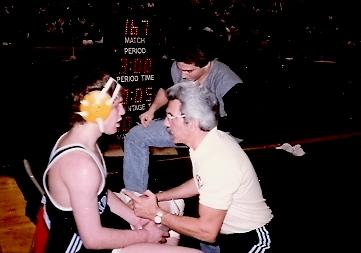 With his 5th place finish at the 1986 NJCAA Championships, Bill Scott earned All-American honors for Middlesex County College.  Scott, who twice finished unbeaten in dual meets, completed his career at Middlesex with a 77-4 record.Wrestling for Brick Memorial in the early 80's, Scott was the program's first ever District and Region champion.  In all, he finished in the Top 8 of the NJSIAA Tournament twice, was a three-time Region and District champion, and compiled a career record of 96-9-1.

CLICK THE BANNER FOR OUR SHORE CONFERENCE TEAMS PAGE!!!